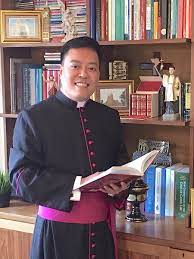 Dear parishioners and friends in Christ,

As we enter the third week of Lent this year, the headlines are filled with disturbing news about the terrible war that is raging in Ukraine. The prospect of humanity coming dangerously close to another world war is enough to turn the stomachs of those who long for peace.

Surely, this has not been a Lenten season that anyone of us expected. We all feel deeply a sense of helplessness before the constant bloodshed that is playing out on the television screen right in our living rooms. At times the sheer senselessness of the war makes us boil with anger. Violence seems to be a legitimate human response to harm and wrongdoing. However, as Christians, we also want to be guided by our faith when faced with a grave moral issue that demands a response.

So, what is the Catholic stance on war? To answer this question, we must look to the example of Jesus himself. When the Lord was being arrested in the Garden of Gethsemane by a violent mob bearing swords and clubs, he could have defended himself in a number of ways. But he did not. Out of a desire to defend Jesus, one of his disciples took out a sword and cut off the ear of a guard. The Lord immediately told him, ―Put your sword away, for those who live by the sword will die by the sword.‖ Then he went on to heal the man. Thus, the Lord‘s final miracle before his death and resurrection was one of reconciliation and forgiveness, after someone has violently attacked him. It shows that the way of Christ is not a way of war. Therefore, the response of Christ‘s disciples – our response – is to love enemies, seek justice, and serve as reconcilers of conflict. This is our standard, our baseline, our mandate, and our call to action. War is not compatible with the Christian faith which informs the way we think and act. It is totally at odds with the belief system professed by the majority of people in the Western world, including the Russians.

Questions of war are complicated. Nevertheless, the teaching of our Church is clear: We are against war. St. John Paul II said this at the time of the invasion of Iraq: ―NO TO WAR! War is always a defeat for humanity. International law, honest dialogue, solidarity between States, the noble exercise of diplomacy: these are methods worthy of individuals and nations in resolving their differences…, the solution can never be imposed by recourse to terrorism or armed conflict as if military victories could be the solution…‖ (Address to Diplomats in 2003).

For the last two years, we have been fighting a war with a ruthless killer called Covid-19. That war has wreaked havoc on our homes, our families, our safety, and our livelihood. These days, while the war in Ukraine is not knocking on our doors, closing our churches, or killing us directly, it is no less atrocious, immoral, and worth fighting against, as it destroys human life and threatens to plunge our entire world into nuclear destruction. This war is unacceptable, intolerable, and incompatible with the way of God. It is a grave sin and an anathema to our Christian faith.

As Pope Francis consecrates Russia and Ukraine to the Immaculate Heart of Mary according to Our Lady of Fatima‘s request this Friday, March 25 in St. Peter‘s Basilica, let us join him in praying for the people of Ukraine and for the leaders of the world who have the power to bring an end to this war. At the same time, let us also join Bishop Brennan and our diocesan Church in supporting the special collection for Ukraine, to be taken up at all Masses in our parish on the weekend of April 3. Covid has turned us inward, now is the time to focus outward to save lives and to defend peace.